11 Iconic Australian Foods You Have To Try

You may have heard of some of the iconic Aussie cuisines, but have you tried them all? Some of them you will discover on board a Mojosurf tour! My personal fav the almighty Vegemite (pronounced Veggiemight), a delicacy only the finest of palettes enjoy.

Vegemite is the most common one that ‘foreigners’ discover, and more often than not, hate! No matter how many people tell you it’s disgusting you should try it at least once. It’s an acquired taste…

So what is Vegemite? Vegemite is a dark brown paste made from various vegetables, yeast extract and spice additives. The most popular way to eat it is on toast with butter. Australian’s also eat it with avocado, melted cheese or tomato. I thought it would taste like syrup, but it tastes very salty and not sweet at all. Best way to eat it is with loads of butter and a thin spread of vegemite. 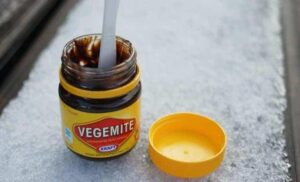 Now this one is really strange and you probably won’t come across it unless you happen to find yourself at a kids party. Fairy Bread is simply white bread with butter sprinkled with hundreds and thousands! 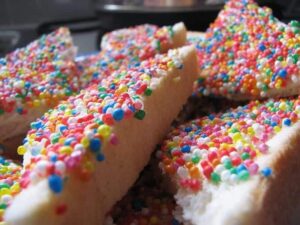 Any backpacker who has traveled through Australia will have tried Australias favourite chocolate biscuit… the Tim Tam. I ate my first Tim Tam after a Mojosurf lesson in Byron Bay and I loved it! If you eat one, it’s hard not to eat a second or third. Warning!! It’s got hidden addictive powers.

From one of the Mojosurf Crew I heard that the best way to eat on is the famous Tim Tam slam: bite the diagonal corners off the Tim Tam and take a cup of coffee, tea or hot chocolate. Use the Tim Tam as a straw and suck the drink through the biscuit. Then before it gets too soggy, and falls into your drink, you eat the soft, gooey (warmness!) #chocolateheavan even better after a winter surf lesson!

Pies are a popular snack to eat on the go and almost every corner shop, bakery and supermarket will have a display case with lots of hot meaty pies to choose from. There are even specialty pie shops! Australians have many different savoury pies you can buy, however they are usually stuffed with minced meat, gravy, mushrooms, onions and cheese. It’s also a good snack after a long night of partying (better than a kebab!). After drinking and dancing you end the night with a meat pie in your hand, sitting on the pavement waiting for your taxi to go home.

Pies come in all flavour combos we also loved the cauliflower & cheese pies for vegetarians needing a midnight snack! 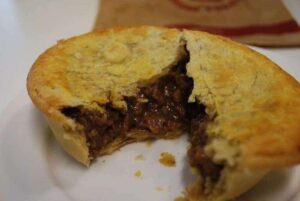 ANZAC stands for the Australian

and New Zealand Army Corps that fought together during WWI. ANZAC Day is a public holiday in Australia to celebrate the men that fought for the country. During the war, the wives baked these delicious ANZAC biscuits to send off to their men at war. They were cheap to make and could stay fresh throughout long boat journeys. They are made with coconut, golden syrup and oats… yum!

(Never call these Anzac Cookies as that will upset Aussies more than you can imagine!) 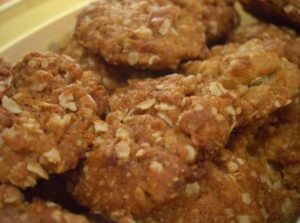 Ok, I know this doesn’t sound particularly Australian, but this is one of the most common foods you’ll find in an Australian pub. Loads of pubs have a parma night where you can grab a decent priced chicken parma with a beer. A chicken parma is a chicken schnitzel (chicken covered in flour, egg and then breadcrumbed), topped with a tasty tomato sauce with melted cheese on top. It’s like Australia meets Italy on a plate! 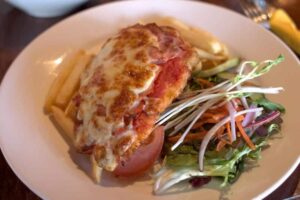 The Aussies and the Kiwis have long fought over the sovereignty of Russel Crowe, Crowded House and the mighty Pavlova – a meringue cake base topped with whipped cream and fruit.

Regardless of its origin, the pavlova is absolutely delicious! You are most likely able to find a Pavlova in most cake shops or bakeries. You can also buy them pre-made from most major supermarket chains (look in the bread or frozen dessert section). Hot Tip: Make friends with an Aussie girl or guy and get invited to their next family BBQ, and taste Nanna’s Pav, it’ll blow your socks off! 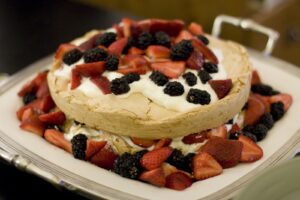 If you really want to experience some proper Aussie Bush Tucker – then a Witchetty Grub is the way to go. These little fellas taste a little like chicken and contain just as much protein as an entire piece of steak! The first Australian indigenous community have eaten these for years and the nutritional benefits may just help you to overcome the texture. 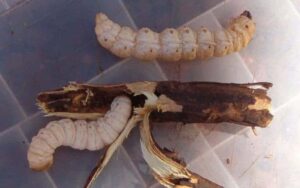 When you think of Australia you think of surfing, nice weather, kangaroos and the barbecue. “Throw another shrimp on the barbie” is a quote often said even though Australians call them prawns and not shrimps! In fact, many Aussies dislike this phrase and claim that it’s just another Australian stereotype.

A typical Aussie barbecue is with sausages, burgers, steak, fresh seafood, bread and tomato or barbecue sauce, they sometimes include salad but it’s mainly about the meat and fish (and of course a few stubbies – that’s beer to the non-Australians).

Australians will literally have a barbeque anywhere, not just at home. Local councils provide barbeques for the general public to use at popular tourist spots like beaches. (Just clean up after yourself!) When you’re staying with Mojosurf or you meet a few locals, you’re sure to have at least one Barbe a week!

While visitors usually take pictures of kangaroos bouncing around. Aussies actually eat Kanagroo meat. You’ll see them packed on supermarket shelves and on restaurant menus. Kangaroo is lean red meat, it’s healthy and you can prepare it in many ways – steaks, burgers, sausages, and much more.

Aussies also eat Emu, yes Emu – in case you don’t already know the Kangaroo and the Emu are on the Aussie coat of arms, I kid you not, google it! Could it be that the Aussies are the only ones in the World to actually eat their coat of arms? 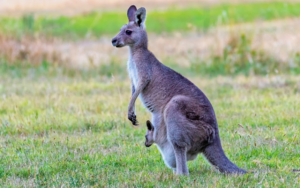 If you like coconut you’ll love this classic Aussie dessert – The Lamington.

Made up of a deliciously, delicate soft, sponge cake, and topped with decadent chocolate topping and immersed in coconut flakes, the ole’ Lamington has been a fixture on the dessert table for generations. 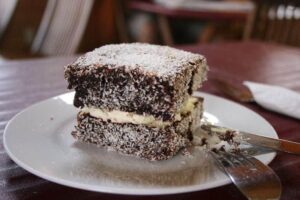 4 thoughts on “11 Iconic Australian Foods You Have To Try”